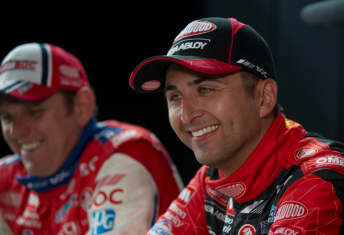 Brad Jones Racing has carried on its dominant form at Albert Park, with Fabian Coulthard leading home team-mate Jason Bright for a one-two finish in Race 1 of the weekend.

Coulthard made the most of his pole position to lead the opening laps, but an early Safety Car as the compulsory pitstop cycle was unfolding soon gave the order a minor shakeup.

Shane van Gisbergen and Jason Bright were two of six drivers that were yet to pit when the yellows were called, and subsequently returned to the track ahead of Coulthard.

The Lockwood Holden asserted its authority after the restart, quickly moving by Bright before eventually taking Van Gisbergen with just two laps remaining.

Van Gisbergen pulled into pitlane with a broken gearbox soon after losing the lead, leaving the Kiwi to start Race 2 from 26th.

Lowndes slid from third to fifth on the final lap as his rear tyres went away, leaving the Red Bull Holden to only narrowly edge out Mark Winterbottom and Scott McLaughlin. 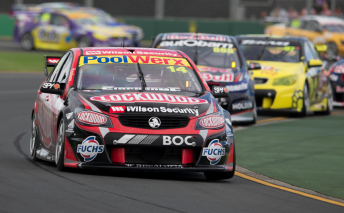 Coulthard leads out of Turn1

Alex Premat’s Fujitsu Holden was the cause of the Lap 3 Safety Car – the Frenchman colliding with a defensive Lee Holdsworth at Turn 1 after exiting pitlane. The contact sent Premat into the concrete wall on the outside of the circuit.

The #34 Holden will not return to the track for the three remaining races.

There had also been carnage on the opening lap, with Tony D’Alberto spinning Michael Caruso amid a three-wide squeeze at Turn 3, scattering the pack in the process.

D’Alberto failed to finish due to the damage sustained to his Holden. Caruso recovered to ensure all four Nissans finished in the top 16.

Holdsworth was the best of the Mercedes entries in 19th despite his collision with Premat.

Having been excluded from qualifying for causing an incident with Premat, Jonny Reid’s weekend didn’t get much better in Race 1. The Dick Johnson Racing Falcon finished in 25th and last position after a mid-race tangle with Scott Pye.

The second of four races for the weekend will get underway at 1420 local time, with the grid set by the Race 1 finishing order.

UPDATE: Winterbottom was dropped to 25th in the result due to an unsafe pit release, while D’Alberto has been deducted 15 points for causing the opening lap incident.