Coulthard doubles up with Race 2 win at Albert Park

Coulthard doubles up with Race 2 win at Albert Park 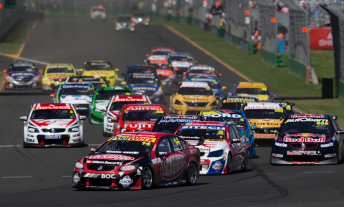 Coulthard leads the pack into Turn 1

Fabian Coulthard has made it two wins from two starts in the MSS Security V8 Supercars Challenge at Albert Park.

Despite starting from pole and enjoying a strong start, the Lockwood Holden driver again had to come from behind after the pitstops.

Coulthard left his stop until Lap 4, emerging behind the Red Bull Holden of Craig Lowndes, which had taken service at the end of the opening tour.

Coulthard quickly closed the gap however, eventually passing Lowndes with three laps to go before easing away to a two second victory.

Lowndes and Jason Bright were second and third respectively at the flag. A pit clash between the pair will be investigated after the race, with Lowndes appearing to have been released unsafely into Bright’s path.

Will Davison played the long game on the way to fourth, waiting until the end of Lap 8 before taking his stop.

Like Davison, Van Gisbergen waited until the closing laps before making his stop. The Kiwi had come from the back of the field after a gearbox failure in Race 1.

Mark Winterbottom also came from deep in the field to finish 12th. The FPR Falcon driver had finished seventh in Race 1, but received a post-race penalty for an unsafe pit release, dropping him to 25th in the final result.

It was Jamie Whincup’s turn to be 25th in Race 2 after a drive-through for spinning his rear wheels during his pitstop. The second of the Red Bull Holdens had been running fourth when issued with the penalty.

Alex Premat failed to start due to the damage sustained to his Holden in Race 1, while mechanical issues saw Garth Tander’s Holden and Tim Slade’s Mercedes fail to finish. As the only car yet to pit, Slade had been leading when his E63 AMG expired.

The third of four V8 Supercars races for the weekend is scheduled for 1520 local time on Saturday, with the grid order to be set by the Race 2 result.