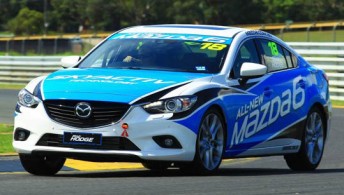 Brad Hodge has taken first blood in the Mazda6 Celebrity Race at the Formula 1 Rolex Australian Grand Prix, the Victorian cricketer taking a lights to flag victory in a somewhat uneventful opening race.

Melbourne Celebrity Chef Shane Delia was fourth in front of Sunrise sports presenter, Mark Beretta. Beretta was in the thick of the action, elbowing his way past Delia into turn one on the fourth lap, before half losing his diesel powered Mazda6 over on Lakeside Drive.

He ended up having a spirited battle with Anna Meares on the final lap – the Gold medal winning cyclist was the best of the female competitors in sixth.

It all came unstuck early for one of yesterday’s pace-setters, Sir Christopher Hoy. The British six times Gold Medal winning cyclist was channelling his documentary subject – Colin McRae with the amount of time he spent in the gravel.

He connected with Beretta on turn three on the opening lap, then got through to lap three when he took a huge dive up the inside of LaPaglia and ended up in the gravel trap.

Another to come unstuck was popstar Vanessa Amorosi, who lost it at turn 14 on the opening lap.

Paralympian, Matthew Cowdrey had his own moment late in the race but was highly competitive finishing inside the top 10.