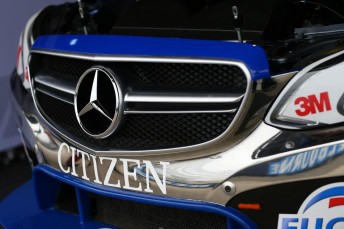 The Erebus Mercedes entries remain a work in progress

A number of pre-event upgrades has Erebus Motorsport hopeful of a smooth weekend at Albert Park following a baptism of fire at the V8 Supercars season-opener in Adelaide.

The non-championship Albert Park event is providing the Mercedes outfit with the perfect opportunity to validate remedies to the troubles that it struck in Adelaide.

The team was granted special permission by V8 Supercars to run at Calder Park on Tuesday leading up to the AGP, where it tested an upgraded software package that is said to have fixed the throttle response issues that plagued its #9 SP Tools entry of Maro Engel in Adelaide.

Craig Baird drove the car during the V8 Supercars-supervised running.

The E63 AMGs are the only cars in the field to run a fly-by-wire throttle system.

Another major problem that the team struck in Adelaide was extreme cabin, and particularly footwell, temperatures.

Lee Holdsworth and Tim Slade both sustained significant burns to their feet in the Adelaide races and continue to sport blisters this weekend.

“We’ve done a lot of work in that area and based on the running we did on Tuesday I think we’ve made an improvement, but we can always be better,” Erebus team manager Dave Stuart told Speedcafe.com of the temperature issue.

“Obviously it’s not as hot here as it is at Clipsal and the races aren’t as long, but we’ll get a pretty good idea of where we are with that over the course of the races this weekend.”

Although its peak horsepower figure is said to be comparable with its rivals, the engine lacks grunt in vital parts of the rev range.

The team continues to work on improving the driveability of the M159-derived powerplant through its mapping, but a significant boost is not expected until the first of its scheduled quarterly upgrades comes online from Germany.

“There’s no too much we can do with the engine until the first upgrade, but this weekend is a great opportunity to work through more of the chassis dynamics of the car,” explained Stuart.

Slade, Holdsworth and Engel will start this morning’s first race of the weekend in 14th, 24th and 28th respectively after an impressive performance from the South Australian in qualifying.

“We’re making progress every time we hit the track, which is what it’s all about at this stage of the year, to keep improving,” said Holdsworth ahead of Race 1.

“We’ve still got to find plenty of speed, but we’re moving forward in baby steps. If we can move forward each race and be in the top half of the field at the end of the weekend I think we’ll be pretty pleased with that.”

Race 1 for the V8 Supercars at Albert Park will kick-off at 1100 local time.