Whincup the benchmark ahead of V8 Supercars qualifying

Whincup the benchmark ahead of V8 Supercars qualifying 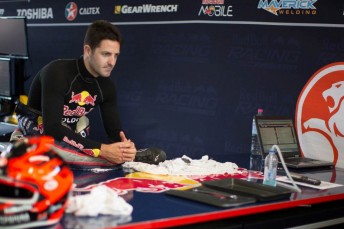 Jamie Whincup will head into this evening’s V8 Supercars qualifying session at Albert Park as the man to beat after topping Practice 2.

Team-mate Craig Lowndes had earlier repeated his Practice 1 performance by going to the top on his second lap, remaining in that position until just four of the 30 minutes remained.

Todd Kelly was the first to dip into his race allocation, moving temporarily to head of the order by a full second in his Nissan.

Alex Premat then enjoyed a fleeting turn at the top before Whincup’s 1:56.66s lap proved too good for all comers.

Mark Winterbottom got closest to the Red Bull Holden, ending up just 0.15s shy after completing his lap with the chequered flag flying.

Like Practice 1, the session was free of red flag periods, although several drivers tasted the circuit’s grass verges as they tested the limits.

Qualifying will take place at 1830 local time this evening.