Pirelli World Challenge Series marries up with V8 Texas round

Pirelli World Challenge Series marries up with V8 Texas round 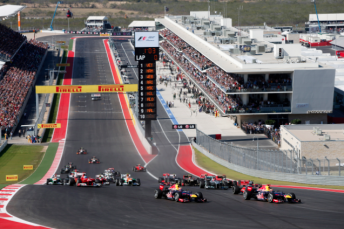 F1 was a mega hit at the Austin, Texas, track last year

A round of the Pirelli World Challenge will be staged in conjunction with the historic V8 Supercars round at the Circuit Of The Americas track in Texas from May 17-19.

The World Challenge is a production-based series that includes a mix of sports cars and touring cars which incorporates various classes including Grand Touring, GTS, Touring Car and Touring Car-spec B.

The GT cars are similar to the ones which comprise the lower end of the grid in the prototype-led American Le Mans Series.

There is a broad mix of marques in the series that will make a rare appearance in the US south-west with the series predominantly centred .

The Austin 400 V8 Supercars round is the first time the Aussie tin tops have ventured into the North American market.

The World Challenge meeting is seen as a nice fit with many of the drivers already having links to V8s including 2011 series GT champion Patrick Long.

“In addition, some of the world’s greatest sports car drivers compete in Pirelli World Challenge, headlined by Johnny O’Connell, a four-time class winner at the prestigious 24 Hours of Le Mans and overall winner at Sebring and the Rolex 24 at Daytona.”