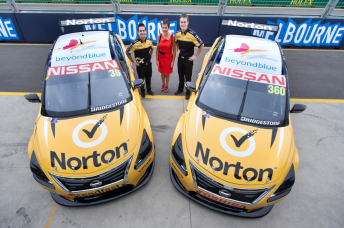 Beyondblue will feature on the roofs of the James Moffat and Michael Caruso driven entries for the non-championship meeting.

“beyondblue is delighted to join Norton by Symantec to raise awareness about depression and anxiety,” she said.

“These conditions are common and treatable and our new partnership will help spread this message amongst the motorsport and wider community.”

The V8 Supercars will enjoy two practice sessions and a qualifying hit-out today ahead of four races on the soft tyres.

Caruso is one of many drivers yet to sample the quicker rubber in his 2013 mount, and says it’s one of several reasons why he’s looking forward to hitting the track.

“It’s a really good chance to understand the soft tyre, because I’ve never been on them at all in one of these cars,” he told Speedcafe.com.

“Albert Park is just a very cool track to drive on, to be honest. It’s fast and flowing, which will be another new challenge for our Altimas.

“The racing that we have here in the past has always been quite dramatic, we’ve seen some of the biggest crashes of the year, and I’d expect the racing to be just as hard this weekend.”

Moffat and Caruso sit 12th and 24th in the V8 Supercars Championship standings respectively after a mixed run on Nissan’s return to the class in Adelaide two weeks ago.