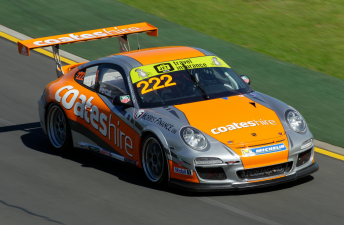 Nick Percat has kept his good form in the Carrera Cup at the Formula 1 Rolex Australian Grand Prix, setting pole position ahead of the opening race of the weekend.

The top five were rounded out by Craig Baird, Warren Luff and Michael Patrizi.

Percat earlier set the pace in the practice session narrowly from Baird in the Jet Travel Insurance car.

“I can’t believe this, to be honest. This is a track where I have very little experience,” said Percat.

“I’ve been here once before in a Formula Ford with great success, but to be quickest this morning and back it up with pole position by a good margin this afternoon is unbelievable.”

Another cycling Gold Medallist, Anna Meares was the best of the female contingent in the Celebrity Race, setting the eighth quickest time.

Earlier in the day, Hoy set the early pace in practice by a significant margin.

In the Total Oils International Sports cars, Brit Michael Lyons will start tomorrow’s race on pole position in his March 717 after blitzing the 31 car field by 1.9 seconds. Another Brit in Andrew Newall will start second with the second row being occupied by Russell Kempnich and JELD-WEN V8 Supercar pilot, Alex Davison.

David Coulthard took the first of the Ultimate Speed Comparisons in the Red Bull Racing F1 machine one-tenth of a second from Casey Stoner in his V8 Supercar and Mick Doohan in his Mercedes-AMG SL63.