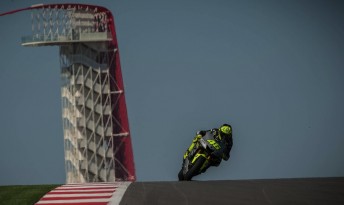 The MotoGP teams have completed the first tests at the Circuit Of The Americas track in Austin, Texas, with Honda’s Marc Marquez setting the early pace.

Marquez recorded a best time of 2:04.619s on the opening day of the scheduled three-day test at the 5.5km circuit that became the new home to the US F1 grand prix last year.

Honda team-mate Dani Pedrosa was .4s off in second place while Yamaha’s Jorge Lorenzo was .672s away after setting the third fastest time.

Not all of the teams have decided to test at Austin which saw only Honda, Yamaha and Stefan Bradl (LCR Honda) take up the testing opportunity.

Riders have reported that the circuit is proving difficult to master.

The Circuit Of The Americas will host the second round of the MotoGP Championship on April 21.