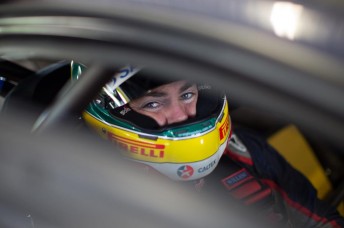 A fast early time from Craig Lowndes was enough to ensure the Red Bull Racing Australia pilot ended the opening V8 Supercars practice session of the weekend at Albert Park atop the order.

Jason Bright split the Red Bull pair with 10 minutes remaining, before first Dean Fiore and then Scott McLaughlin moved to second in the dying moments.

Bright had lost time early in the session with a flat tyre.

All cars ran on their pre-marked hard compound tyres during the session, with the soft rubber not expected to be seen until later in the day.

Practice 1 ran green for its duration despite Scott Pye beaching the #80 Lucas Dumbrell Motorsport Holden in the Turn 3 gravel trap at the 22 minute mark.

Lee Holdsworth was also in trouble, with his IRWIN Mercedes-Benz only completing four laps due to mechanical issues.

Lowndes, who leads the V8 Supercars Championship standings after a strong run at the season opening Clipsal 500 Adelaide, said he was encouraged to see himself at the top of the sheet at the end of the session.

“It’s only practice but the car is working well,” he said.

“We made a number of adjustments like everyone but so far I’m comfortable.

“We had to change our springs to suit the conditions. It wasn’t as gripped-up as we thought it’d be but the car is responding well and like everyone else we’re still learning about these new cars.

“We’ve got another practice session this afternoon and hopefully we’ll be on the money for qualifying.”