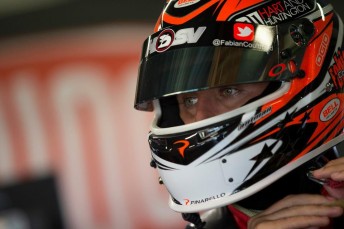 The result marks Coulthard’s first career V8 Supercars pole position and comes off the back of a fast but ultimately fruitless run in Adelaide two weeks ago.

Bright ended up second fastest but will start just fourth thanks to a two-place grid penalty for passing the chequered flag twice at the end of Practice 1.

Shane van Gisbergen and Craig Lowndes both gain from Bright’s penalty to line up second and third respectively.

Michael Caruso was the fastest of the Nissans in 12th, while Tim Slade was an encouraging 14th in the leading Erebus Mercedes.

A 1:56.44s effort from Whincup proved the best of the initial laps, before the Red Bull driver lowered the benchmark by a scant 0.02s on his second set of tyres.

That effort was quickly eclipsed by the second runs of first Bright (1:56.02s) and then Coulthard (1:55.67s), with both times proving unbeatable over the remaining 12 minutes.

Van Gisbergen was the only driver to penetrate the top four on his third set, leaping from outside the top 10 to third following significant in-session set-up changes.

Tenth for Winterbottom came after the FPR driver damaged the steering in his Falcon on his final lap.

Alexandre Premat’s session ended with rather more visible damage – the front-end of the Fujitsu Holden mangled after contact with Jonny Reid, who had swerved into the path of the fast-approaching Frenchman.

Race 1 of 4 for the V8 Supercars this weekend will get underway at 1100 local time tomorrow.