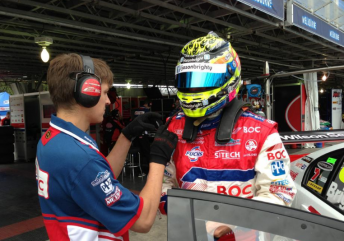 A fundamental error from Jason Bright at the end of the first practice session cost Brad Jones Racing an historic one-two on the grid for the first V8 Supercars race of the weekend at Albert Park.

The former Bathurst 1000 winner ended qualifying second to team-mate Fabian Coulthard, but will start fourth after a two-place grid penalty for crossing the chequered flag twice in Practice 1.

“I didn’t see the chequered flag, it was hiding behind a bit of plastic and I was looking down at my dash,” admitted Bright after the session.

“It’s a bit disappointing because it would have been good to see two BJR cars off the front of the grid for the first time ever, but we’ll just have to do that in Tassie!”

Penalty aside, it was another encouraging day for the Albury-based Holden outfit.

Having topped the pre-season Sydney Motorsport Park test on the soft tyres, the squad was again the class of the field as the grippier rubber was rolled out for qualifying in Melbourne..

Friday morning’s 12 lap opening race will be the first test of each team’s ability to make the soft tyres live over a distance, however.

Corner entry oversteer continues to be a hallmark of the new-generation cars as teams work on understanding the intricacies of the independent rear suspension.

“Everyone is in the same boat,” said Coulthard of the lively car behaviour seen throughout the field.

“Me and Brighty were in the truck prior to the session saying how bad our cars are, but they can’t be too bad relative to the rest of the field.

“I think it’s fundamental across the category, it’s just the degrees of difference with how much you’re suffering.”

“I think with the soft tyre around here the wear is pretty high,” added Bright of the race.

“Soft tyre racing is what we had here last year, and we might not see as much degradation (as last year), but no one has got much experience on the soft tyre with the Car of the Future yet.

“There’s no doubt that the cars aren’t quite right yet, they’re moving around a lot more than what we’d all like, which is a lot harder on tyres. Tyre life will definitely be a factor (in the races).”

Despite the unknown tyre durability, pitstops are expected to kick-off as soon as the end of the opening lap tomorrow.

As team-mates, Coulthard and Bright share a pit boom, with the strategy call to be given to the leading BJR Holden at the end of Lap 1.

Due to a lack of space in the AGP pitlane, each team is only allowed to have one car in pitlane at a time, meaning there is no double-stacking allowed.

“It’s definitely the difficulty of this race meeting that you’re only allowed to pit one car at a time, but if there’s not a Safety Car (on the opening lap), I don’t think it’ll make a huge difference,” said Bright of the likelihood that he will be behind his team-mate on the opening lap.