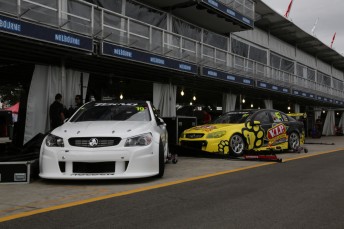 The Tekno Autosports Commodores, one of which won the Clipsal 500 on the hard tyre, in the Albert Park pitlane

This weekend’s V8 Supercars support races at the Australian Grand Prix will provide the first clear insight into the relative performance of the teams’ new 2013-specification cars on Dunlop’s soft compound tyre.

V8 Supercars elected to undertake a complete reversal of the Albert Park tyre allocation just days out from the event, with 16 soft tyres being issued to each car instead of the originally planned 16 hards.

Many teams are yet to complete significant miles on the quicker rubber, with only a handful electing to run a short burst on the tyres at Sydney  Motorsport Park’s pre-season test before the solely hard compound season-opener in Adelaide.

Although the bigger wheel and tyre package under the new-for-2013 rules has been one of the biggest technical changes for the teams to come to terms with, Dunlop’s V8 Supercars’ operations manager Kevin Fitzsimons says there should not be any major surprises for those that have yet to run the soft version.

“In the testing we found that the relative difference in characteristics between the soft and the hard largely carried over from the 17-inch to the 18-inch,” he said.

“So what they found with the hard tyre will also carry over to the softs as far as its durability over a long run and all of those sorts of things.

“The main thing that they’ve got to be careful of is not going too low on the pressures,” he added, referring to temptation with teams to run low pressures in order to aid traction. 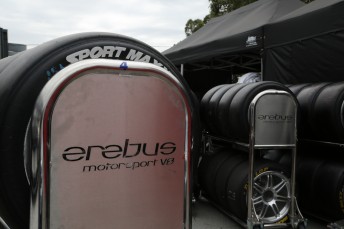 “You’re going to have a lot more grip (than with the hard) and you’ll torture the casing and everything else (with low pressures).

“It’s going to be good for the teams to get some miles on these tyres before the championship rounds in Tasmania and Perth.”

Given the amount of learning that still needs to be done with the new cars, the simplified four-race format at the AGP this year has won widespread acclaim from the paddock.

While previous years have seen a variety of gimmicks, including a ‘knock-out’ qualifying race last year, the 2013 event sees four conventional races, each with a compulsory pitstop for a four-tyre change.

The grid for the final will then be determined by the cumulative points from Races 1, 2 and 3.

Team BOC’s Jason Bright told Speedcafe.com that the format will better incentivise teams to race for the win, as well as allowing them to learn more about their new cars.

“When we can see that if you qualify well and race well you’re going to get a good result, I think that makes a difference to people’s attitudes,” he said.

“Lotteries and having one-side of the grid one brand of car or whatever just makes a bit of a mockery out of it, I think. That’s when you have teams not putting in the effort. This year the fastest cars will win, and that’s what will make people have more of a go.”

The V8 Supercars will enjoy two practice sessions at Albert Park this afternoon ahead of qualifying at 1830.