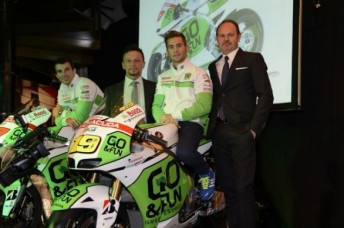 The unveil, which took place in Milan, introduced GO&FUN – a Green Energy Drink – as the replacement sponsor on the Fausto Gresini-owned Honda squad for this year, which includes extending its support to the two Italian youngsters in Gresini’s Moto3 team.

Staring – the Perth-raised 24-year-old – will line up in the CRT category on an FTR Honda combination in his MotoGP debut, whilst Bautista – the 2006 125cc World Champion – will have an outright Honda RC213V underneath him.

An excited Staring expressed his delight at being part of the well-renowned team and the new challenges that lay ahead during season 2013.

“Everything is new for me: a new bike, new team, new colours… it’s a fantastic feeling,” the 2010 Australian Superbike Champion said. “I am sure this will be a fantastic year for me and I hope to pay Team GO&FUN Honda Gresini back with my performances on track.”

Gresini’s enthusiasm about the year ahead was also unbridled, however tempered expectations about what could be expected from Bautista and Staring in the Castrol-backed outfit. Staring is joined by Bautista, Gresini and the pair of Italian Moto3 youngsters at the GO&FUN launch in Milan

“We have some ambitious projects lined up for the present and future and we are taking them on with an approach that we are sure can reap positive rewards,” he said. “The challenge ahead of Alvaro Bautista and Bryan Staring in MotoGP is huge and I am sure that our youngsters in Moto3, Niccolò Antonelli and Lorenzo Baldassarri, will give us plenty to get excited about as the season progresses.”

Some MotoGP teams are having their first taste of the Circuit of the Americas in Austin this week, with the pair of Honda factory bikes of Marc Marquez and Dani Pedrosa topping the time sheets in the opening testing session.

In other MotoGP news, Ducati rider, Nicky Hayden has undergone surgery to repair damage to his wrist sustained in his wild Indianapolis crash last year and further exacerbated in his infamous tumble over the fence at Aragon in the back end of the 2012 season.

The MotoGP World Championship will get underway on April 7 under lights at the Losail circuit in Qatar.