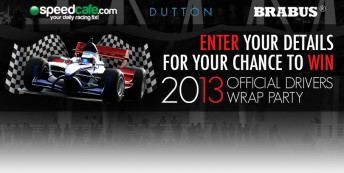 Win tickets to the hottest AGP afterparty in Melbourne this weekend

Speedcafe.com readers have the chance to win tickets to the official drivers wrap party at the Melbourne Grand Prix presented by Dutton & Brabus.

CLICK HERE to enter the competition by telling us in 25 words or less, why you need to go to the greatest F1 afterparty in Melbourne.

There are five double passes to give away in conjunction with Dutton & Brabus and Speedcafe.com.

The exclusive drivers wrap party is the hottest party in town and returns to Melbourne for 1 night only at the conclusion of the 2013 Australian race, Sunday 17th March.

Come and join the drivers up close and celebrate a successful racing weekend while mingling with the World’s best drivers and teams members.

Celebrate the official and exclusive drivers wrap party in Melbourne, for the 10th year running, from track to “THE TRAK”.

If your not lucky enough to win this time, there are a limited number of tickets still up for sale. CLICK HERE to purchase tickets to the party through Ticketmaster.