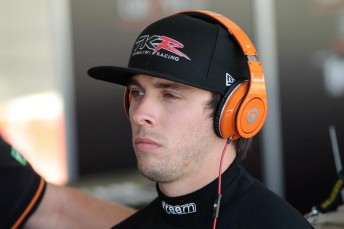 Davies says the third-tier class offers the perfect opportunity to gain miles in a V8 Supercar without interfering with his Porsche program.

“We’ve been looking for a way into a V8 for some time and with our focus on the Carrera Cup drive with TKR (Team Kiwi Racing) there was no way I could have committed to a Dunlop Series program as they race on the same weekend, so the Kumho Tyres V8 Series fits the bill perfectly,” he said

“V8 Supercars are among my future considerations, so when the opportunity came up to drive for Jose (Fernandez) as the defending champion team I didn’t need asking twice.

“I’m really looking forward to driving the car and also racing regularly, which I feel will only stand me in good stead going forward.”

He sits fifth in the Carrera Cup standings after a strong showing at the opening event in Adelaide.

Round 1 of the Kumho Series will take place with the kick-off of the 2013 Shannons Nationals at Sydney Motorsport Park on March 22-24.