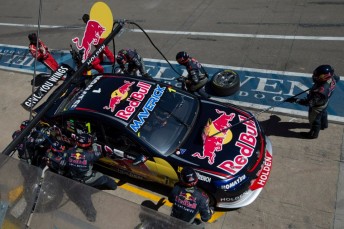 Whincup was put in a difficult position last August when his Triple Eight team announced that Red Bull would replace its long-time naming rights sponsor Vodafone in time for the 2013 season.

Whincup has been a Monster sponsored driver since 2009, signing a fresh three-year personal sponsorship deal with the firm in March of 2012.

Whincup participated in last month’s pre-season test at Sydney Motorsport Park and the recent Clipsal 500 Adelaide devoid of Monster branding despite the company applying for an injunction against him doing so.

The injunction was dismissed largely on the testimony of Triple Eight managing director Roland Dane, who stated that Whincup would have been sidelined for the test and the Clipsal 500 had he been made to display Monster branding ahead of this week’s hearing.

Dane’s affidavit also underlined the probability that Whincup would have been benched for the entire season had the injunction been granted, arguing that missing the opening round would have ruled his driver out of the championship fight.