Wilson Security to feature on both DJR Fords at AGP

Wilson Security to feature on both DJR Fords at AGP 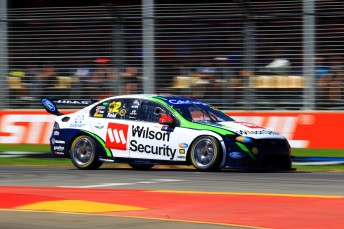 The change will see both the Falcons of Jonny Reid and Tim Blanchard run Wilson Security branding with the #17 of Blanchard switching from the signage of sister company ADVAM it ran at the Clipsal 500 recently.

Both DJR Fords struggled for pace across the Adelaide weekend and returned from the notoriously demanding event with only superficial damage to the #12 car.

DJR have been working on trying to seal its commercial arrangements through to the end of the financial year, with the current Wilson deal only in place until the conclusion of this weekend.

It sees the non-championship grand prix meeting as vital to its effort to return to the competitive form which saw it win the 2010 V8 Supercars Championship with driver James Courtney.

“The event is very important from the racing and the corporate aspect. DJR have raced at every AGP since 1985 so we are always keen for success at this event,” eponymous team owner Dick Johnson said.

The MSS Security Challenge will see the V8 Supercars on track at all four days of the Grand Prix meeting from Thursday. There are four scheduled races – two on Friday and one each on Saturday and Sunday.