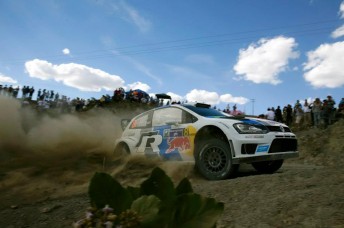 Sebastien Ogier has taken a commanding victory at Rally Mexico, including the bonus points power stage.

Even with a scare prior to the day’s opening stage when he had to spend 20 minutes fixing a sensor issue on his Volkswagen, Ogier was in a class of his own.

The VW Polo R driver won the event by over three minutes from the Citroen of Mikko Hirvonen.

Ogier’s record in 2013 already reads two wins and a second place to hold a 44-point lead over Hirvonen, although the semi-retired Sebastien Loeb is 31 down on Ogier.

“The start of the season is just amazing for us,” said Ogier.

“We want to thank the team because the car was perfect again all weekend. Okay, just a small alarm this morning with a sensor but it was not a drama, and here we are again at the end with a perfect amount of points.

“Now we have quite a good lead for the championship after just three rallies. For sure the season will be long, but already it’s not bad.”

Hirvonen started Sunday under pressure from Thierry Neuville. The Belgian went flat-out to try and snatch second place, but a trip off the road on the first stage convinced him to back off and let Hirvonen take the position.

Australia’s Chris Atkinson finished sixth overall after overhauling Ken Block’s Ford on the final day. On what is currently a one-off in Khalid Al Qassimi’s regular Citroen, Chris Atkinson recovered from Leg 1 steering damage when he slipped outside the top-10.

“It was a testing event after losing all that time on the first day, but the Citroen Racing team did an awesome job with the DS3 and we fought back from 15th to secure some soild points for Abu Dhabi Racing!”