Rowe and Sera the big winners in Victoria

Rowe and Sera the big winners in Victoria 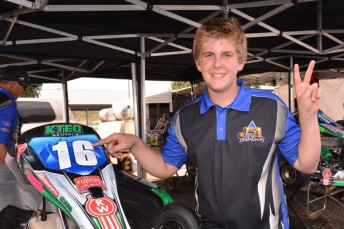 Nicholas Rowe and David Sera were the big winners during the Victorian Karting Championships in Puckapunyal.

The pair both won two categories at the event with Rowe enjoying victory in the Junior Clubman and Junior National Heavy categories and Sera in the Rotax Light and Clubman Heavy divisions.

Rowe’s win in Junior Clubman was won by virtue of a last corner pass on William Hawkes while the pair also enjoyed a titanic battle in the Junior National Heavy category before Rowe came out on top.

“It has been an awesome weekend. I qualified on pole in the J (Junior National) and fourth in the Clubby, ran strongly all weekend and got lucky to win them both,” said Rowe.

“In the Junior Clubman race I knew Hawkesy was coming and that he had a lot of speed. When he got past me I knew that I had to go with him. He was blocking well on the last lap but then midway through the double left hander coming onto the straight he ran wide so I stuck it (the kart) in there and it paid off. “  Victorian David Sera added another two State Championships to his illustrious list of achievements with victory in both the Rotax Light and Clubman Heavy categories.

Competing under the KTEQ Rentals banner for the first time, Sera was nothing short of dominant on his way to victory in the Rotax Light category while he was forced to fight hard for his win in Clubman Heavy. 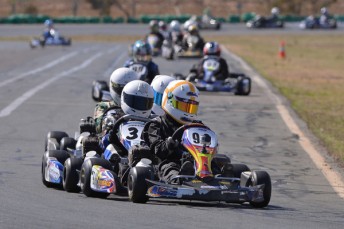 “All weekend I was running fourth or fifth and realistically didn’t think that I had the speed to win but in the end I had some luck on my side and was able to make the right moves at the right time,” said Sidebottom.

“I’ve only been racing Junior National for two months, so to come away with the win here is just an amazing feeling. A huge thanks must go to my family for all of their support in my racing, along with Brett Arnett from A1 engines.”

New South Wales driver Jayden Ojeda got the jump at the green light of the Junior National Light final as Mitic shadowed his fellow Arrow pilot before taking over the front running on lap five.

The battle for the lead then became a four-way fight with Sidebottom and Nicholas Cardamone joining the leading duo. After a frantic final few laps, it was Sidebottom who snared the win ahead of Morse and Mitic.

Brendan Nelson continued his recent ‘purple patch’ with his third victory in major events in as many weeks when he crossed the line ahead of Matthew Wall in the Rotax Heavy category.