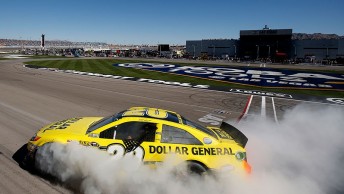 Matt Kenseth celebrated his 41st birthday with his first win for Joe Gibbs Racing in the Kobalt Tools 400 at Las Vegas.

In what came down to a dogfight with Kasey Kahne over the last 20 laps, Kenseth prevailed as lapped traffic became an ever present danger.

After 13 seasons driving for Ford, the Toyota driver Kenseth kept his nerve as he screamed at his spotter to order the lapped traffic out of his way in the closing laps.

“I was kind of bummed out at being 29 but seeing it came with a win I’ll take it,” Kenseth joked afterwards by becoming only the fourth driver to win a Sprint Cup race on his birthday.

During the fourth yellow period of the race with just over 40 of the 267 laps to go, Kenseth took the lead for the second time in the race.

Kenseth led on the messy restart with 18 cars on the same lap as the Joe Gibbs Racing driver with Brad Keselowski pushing hard for the lead.

Another caution came out with 32 laps to go with Ryan Newman buzzing his engine after a missed gear change, laying a trail of oil on the track.

Kasey Kahne took advantage of the restart spearing into second behind Kenseth with Kyle Busch, looking for his first decent result of the season moving into third position.

But Busch could not shake off the advances of Keselowski, who after a couple of tense moments, managed to scramble to third and continue his slick form from Daytona and Phoenix.

Here is the run to the finish in Las Vegas