Sebastien Ogier ‘shuts the gate’ on the opposition in Mexico

Sebastien Ogier ‘shuts the gate’ on the opposition in Mexico 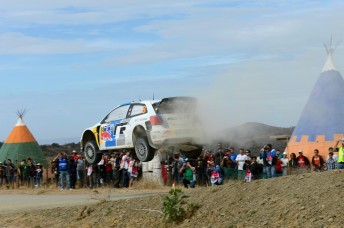 Sebastien Ogier is off the planet in Mexico

Not even a closed gate on a stage could stop Sebastien Ogier from taking a near three-minute lead into the final day of Rally Mexico.

The dominant Volkswagen lost half a minute on the final forest stage when he came across a gate that had been closed across the stage.

Just like the old days of endurance trials in the Australian outback, co-driver Julien Ingrassia had to get out and open the gate to let the VW Polo R through. “Maybe somebody didn’t want me to win,” joked Ogier.

“There’s still one day to go and in the morning we have the longest stage of the rally so we must keep our concentration. I want to drive at a good rhythm and have fun.”

Even with the gate episode, Ogier was under no threat winning five of the day’s seven stages, plus nearest rival Mikko Hirvonen suffered a puncture on the final forest stage.

It cost the Citroen driver around two minutes and he is now just 7.5 seconds ahead of the Ford of Thierry Neuville.

Ken Block’s (Ford) sixth place is under threat from the fast finishing Chris Atkinson (Citroen), with just 26.7s between the pair fighting for sixth.

Earlier in the day Mads Ostberg retired from second place with clutch and electrical problems. CLICK HERE for the mid-leg report.

The rally concludes with a single loop of three stages, including the 55km Guanajuatito, on Sunday.

Highlights of the afternoon stages on Leg 2