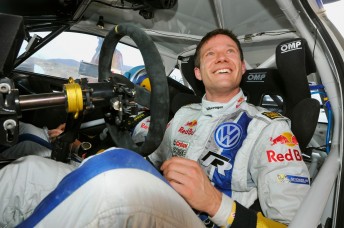 All smiles for Sebastien Ogier midway through Leg 2 in Mexico

Sebastien Ogier has continued his push towards victory at Rally Mexico, holding a 68 second lead over Mikko Hirvonen at the midway point of the second leg in Leon.

The Volkswagen Polo R’s task was made a lot easier when his closest rival, Ford Fiesta RS driver Mads Ostberg, retired with clutch and alternator related problems during the morning stages on a road section.

“On the road section I had an alarm on my screen for the alternator,” said Ostberg.

“Because of the clutch problem, we had to restart the car each time we stopped. But the alternator wasn’t charging and it took about five minutes to empty the battery before the car stopped,” he added.

Sympathetic to Ostberg’s fate was Ogier.

“Okay, It was a great morning for us but I feel a bit disappointed for Mads, he deserved better than that,” said Ogier.

“This morning he did a really good job and it’s a shame for him. We were okay, and on the second one I really backed off but still we were fastest. Now we just want to get to the end, avoid all rocks and try to save the car as much as we can. We’ll be very safe.”

Ostberg’s exit promoted Citroen team-leader Hirvonen to second. But faced with a 1m08.4sec gap to Ogier, the Finn acknowledged there was little chance of catching him through driving alone.

“We started the day with Ostberg in our sights, and I tried to attack in the first stage but when we heard he was out that took the pressure off,” said Hirvonen. 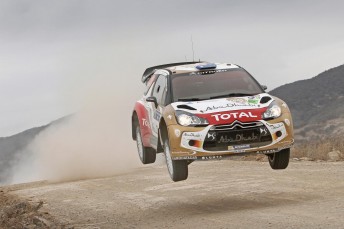 Chris Atkinson is jumping back up the leaderboard

“My pace was okay in the first stage but Ogier was amazingly fast. After we heard about Ostberg we haven’t pushed. Unfortunately now we are concentrating on just holding the place. It’s not so difficult. But of course anything can happen.”

Ford Fiesta RS driver Thierry Neuville began the day fourth but returned to service in third, despite struggling for much of the morning with broken steering.

Australia’s Chris Atkinson holds eighth in his Citroen DS3 and hopes to make further progress up the leader board. But that won’t be easy from his start position of third on the road. “Okay, the road position is hurting us but the times are pretty good,” he said.

“It’s difficult to push too hard because that takes us off the swept line but we’re about 0.6 sec per kilometre off Mikko’s pace and he has a much better road position. We’re chipping away. Okay, it’s frustrating after our problems yesterday but we can still get some good points if we carry on like this.”

Four further stages will be run in the afternoon of Leg 2.

Highlights of the morning stages on Leg 2