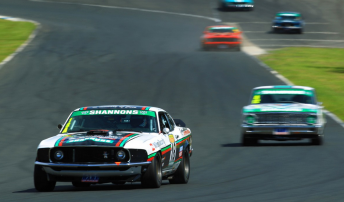 Having recorded a lights-to-flag victory in Saturday’s Race 1, the Ford Mustang driver made light work of Sunday morning’s reverse top 10 grid Race 2 – taking the lead by just the sixth lap.

An early tussle with the Ford Falcon Sprint-mounted Jim Richards followed in Race 3, but the 1995 Australian Touring Car Champion was simply too good.

“I’m very pleased with the day, the weekend really, and our new little team is just awesome,” said Bowe afterward.

“I think there is a strong top six or so at the moment, and on the shorter track it’s been different having traffic, but the racing has been clean and exciting, a really good show for all the Festival fans.”

Richards took second for the round, despite proving unable to hold off first Bowe and then the Chevrolet Camaro of Andrew Miedecke in the final.

The opening round of the 2013 Radical Australia Cup also took place as part of the Sydney meeting, with Neale Muston given his new SR8 model three wins on debut.

The defending series winner proved the class of the field in all three encounters, leading home second-placed man Ash Samadi by 30 seconds in the 50 minute feature.

Thirds in the opening two encounters made for an impressive weekend for Australian GT Championship convert Samadi.

Nick Kelly also enjoyed a consistent weekend with a fourth, a second and a third, while John Corbett and Nathan Antunes combined to ensure the SR8 they shared was never out of the top six.