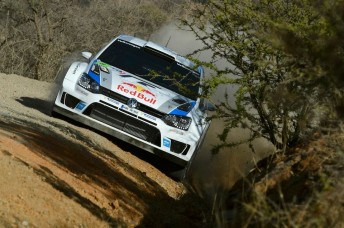 Sebastien Ogier has enjoyed a solid morning in Mexico

Volkswagen’s Sebastien Ogier holds the lead of Rally Mexico at the midpoint of the opening leg, the Frenchman returning to service in Leon after SS7 with a 12.9 sec advantage over Ford Fiesta driver Mads Ostberg.

Ogier made his big move on the 30km El Chocolate test, completing it 13.7sec quicker than his rival.

The Frenchman rounded off the morning loop with a win on the short Street Stage in Leon. “Okay, we haven’t had the best road position but we’re leading the rally now, so we can be happy with that,” said Ogier.

“Considering the grip we had we have done a good job. Mads is going really well, he’s just behind. We have to work hard this afternoon to keep him there.”

Ostberg wasn’t always comfortable with the handling of his Fiesta RS but remains confident that he can catch Ogier.

“I’ve been struggling with the set-up all the way but the times were good,” he said.

“It’s difficult to have a car that works well on both fast and slow corners here. We had a good run on the long one [SS6] but near the end I hit a rock and thought I had a puncture because the car felt strange. I slowed a bit but I think it was just the tyres overheating.

Mikko Hirvonen is third, 5.3sec behind Ostberg in his Citroen DS3. The Finn was frustrated with his driving on Friday’s opener but improved as the day progressed and was Ogier’s closest rival on the El Chocolate stage. 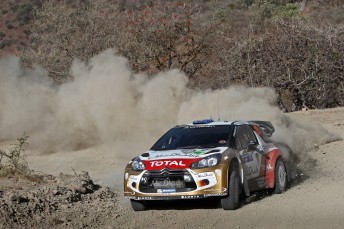 A tough morning for Chris Atkinson

Fiesta RS driver Thierry Neuville is fourth, 7.9sec behind Hirvonen and satisfied with his morning’s work.

As good as it has been for Ogier, it was the complete opposite for VW team-mate Jari-Matti Latvala, whose rally ended 500m into the opening stage when he hit a rock and broke his front wishbone.

Australia’s Chris Atkinson also suffered a similar incident but managed to continue, limiting the damage by finishing ninth or higher on the remaining three stages.

Atkinson broke the power steering and forced him to make emergency repairs to replace a damaged bolt in the steering before the start of the next test.

“I don’t know where the rock came from,” said Atkinson, who is subbing for Khalid Al Qassimi.

“I thought we’d get a puncture – I wish we had, we were only a kilometre from the finish.

“Just before the start of the next stage, I gave it some gas to make sure it was OK and something broke. Luckily, we hadn’t gone into the control, so we worked to fix it.

“A bolt was bent in the steering, so I had to whack that to straighten it to get it out and then we had to drive the rest of the morning with no power steering.”

Evgeny Novikov also struggled with a damaged ECU which cost around seven minutes.

He lies 13th overall, more than 12 minutes down on Ogier.

There is six further stages to run on the opening leg.