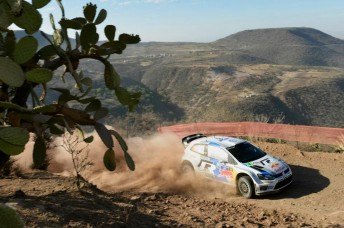 Sebastien Ogier is in control at Rally Mexico

Sebastien Ogier has cleared out to a handy lead at the end of the first leg of Rally Mexico.

The Volkswagen Polo R driver heads Mads Ostberg in a Ford Fiesta RS by 33 seconds, after stamping his authority on the event, especially over the long stages.

Ogier and Ostberg traded the lead early in the leg, but it was on the 30.57km El Chocolate stage that he took the ascendancy in the morning, and he did the same on the repeat running of the stage in the afternoon.

Team-mate Jari-Matti Latvala damaged his suspension just 500 metres into the opening stage and Australia’s Chris Atkinson also had dramas in the same stage. CLICK HERE for the mid-leg report.

Atkinson had a strong afternoon and climbed back to 10th. If he has no other issues in the event, the Queenslander still has a chance to grab further positions over the next two days of competition.

“I’ve finished third here and been five minutes behind. I reckon I could get back to fifth with a clean run to the finish.

“This thing’s definitely not over. OK, we dropped a lot of time, but we could have been out and coming back with half an hour of penalties.”