Brad Keselowski on pole after rain marrs Las Vegas round

Brad Keselowski on pole after rain marrs Las Vegas round 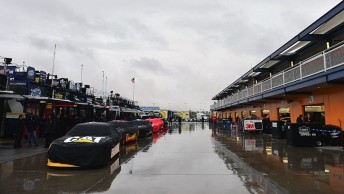 Rain forces qualifying to be abandoned in Las Vegas

NASCAR has reverted to setting the starting order for the Las Vegas race based on points, giving the number one berth to defending Sprint Cup champion Brad Keselowski.

Rain continued on Friday forcing all Sprint Cup sessions to be abandoned and delaying the start of the Nationwide race.

Keselowski will assume the pole with the line up based on last season’s points for the Kobalt Tools 400.