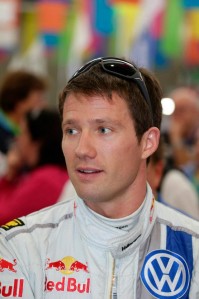 Thierry Neuville and Sebastien Ogier took a win apiece in the opening two street stages of Rally Guanajuato Mexico, but it is Ogier in the Volkswagen Polo R who heads the field ahead of the first full day of stages.

The VW driver was fourth in Guanajuato just 0.5sec behind the Ford Fiesta RS of Neuville. But fastest in the second stage promoted him into top spot overall, 0.3sec ahead of the Fiesta RS of Mads Ostberg.

Mikko Hirvonen was second in Parque Bicentenario, just a tenth of a second behind Ogier, the Finn regaining time after almost stalling on the startline of the opening test.

Ostberg was third, with Dani Sordo, Neuville and Australia’s Chris Atkinson rounding off the top six. Atkinson is driving a factory specification Citroen DS3 this weekend.

Both Atkinson and Ken Block clipped a kerb inside Guanajuato’s tunnel, Block sheepishly admitting it was the same stone he hit last year. Neither Atkinson’s DS3 nor Block’s Ford Fiesta RS were damaged. Latvala stalled at the start of the second stage.

Earlier in the day Hirvonen won the qualifying stage and has opted to run as far down the start order as possible for the opening leg.

Behind Hirvonen it was a case of follow the leader. Second quickest Evgeny Novikov chose 12th in his Ford Fiesta RS, with third fastest Thierry Neuville opting for 11th in a similar car. All the remaining drivers chose the next lowest position available.

The start order for the opening leg is: