Alex Davison will take a temporary diversion from his revived V8 Supercars career when he drives a legendary Porsche at Phillip Island this weekend.

Davison will race the famous Porsche 936, that dominated the 1981 Le Mans 24 Hour race, at the Phillip Island Classic Festival of Motorsport.

It was fitted with a new twin turbo six cylinder powerplant with water-cooled cylinder heads which produced a stunning 620bhp (462kW) of power. 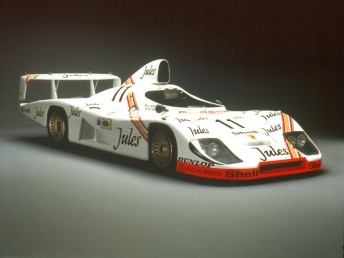 The Le Mans winning Porsche that Davison will drive

With two Le Mans legends, Jacky Ickx and Derek Bell at the helm, the 1981 version of the 936 claimed pole and claimed victory in the twice-around-the-clock epic by a 14-lap margin.

Davison has strong links to Porsche being a successful driver both in Australia and in Europe for the German marque. In 2008 he won the Porsche Cup, an award presented by the manufacturer to the most successful privateer Porsche sportscar competitor in the world.

Davison will drive the 936 in the R Sports category which also includes a 1985 De Tomaso Pantera to be driven by touring car hall-of-famer Larry Perkins, a Porsche 956C driven by Russell Kernpnich and a stunning Porsche 962 which will be driven by Peter Harburg.

V8 Supercars Commission chairman Mark Skaife is also racing at the Victorian venue, getting behind the wheel of an ex-Gibson Motorsport Nissan Skyline HR31 in the Group A & C races.