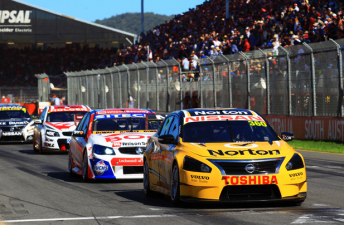 Nissan’s global motorsport manager, Darren Cox, believes that the success of his company’s V8 Supercars program will lure at least one more manufacturer into the category within the next 18 months.

The Japanese brand is the only new manufacturer to commit to a V8 Supercars project since the Car of the Future concept was officially launched three years ago, joining Holden, Ford and Erebus’ private Mercedes-Benz operation on the grid for the first time at the Clipsal 500 last weekend.

Nissan’s commitment to the sport is a multi-year, multi-million dollar, proposition that has seen the formerly Kelly Racing Holden outfit morph into Nissan Motorsport.

Nissan, which according to VFACTS beat Holden to third spot in last month’s new vehicles sales race in Australia, is specifically using the category to push its yet-to-be-released Altima sedan model.

Cox describes V8 Supercars as the best value-for-money spend in Nissan’s global motorsport portfolio, which contains a variety of GT and sportscar programs, including a recently announced electric Le Mans entry for 2014.

Although explaining that he is not surprised that no other marque has committed to the COTF as yet, the Englishman believes that Nissan’s efforts will blaze a trail for others to follow. 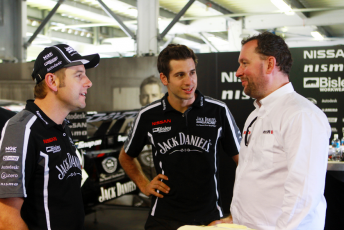 “The car industry is a funny place at the moment,” he told Speedcafe.com.

“There are not many car companies that are, firstly, increasing their marketing budgets and, secondly, have the boldness and confidence to do something new.

“It’s a difficult thing to start something new, and I give a massive pat on the back to the Nissan Australia guys for getting this project off the ground. It wasn’t like we were spending ‘x million’ last year and needed another five percent this year. This was a blank sheet of paper, a new number in a budget.

“So I’m not surprised that other manufacturers haven’t come in because it’s a very difficult thing to start a new program, but what I think will happen is that people will see what we’ve got, they’ll see the model we’ve got as a manufacturer with what was Kelly Racing, and they’ll decide to come and join us.

“I will be surprised if in 18 months time there’s not at least one other manufacturer on the grid. It (another new factory team) can only help us as well if other people are spending money on promotion and bringing in new fans.”

The four-car Nissan Motorsport outfit enjoyed a promising if troubled debut at the Clipsal 500 Adelaide, with Rick Kelly taking the team’s best finish of 11th in Saturday’s race.