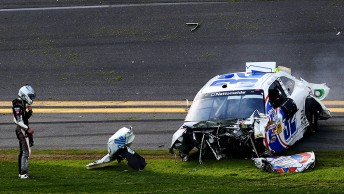 Daytona International Speedway is bracing for a spate of liability claims following the horrific accident on the last lap of February’s Nationwide Series race that injured in excess of 30 fans.

The speedway has retained a law firm to deal with the consequences of the incident that saw a complete wheel and tyre from Kyle Larson’s car penetrate the catch fencing on the front-stretch.

Two fans were hit directly by the wheel – one of which remains in hospital with a collapsed lung – while many more were showered in debris.

NASCAR meanwhile says it is reviewing its safety fencing, particularly for the restrictor-plate tracks at Daytona and Talladega.

“We have a race coming up in May at Talladega and anything we can learn in the immediate future that can be applied to Talladega, we’ll do that,” said NASCAR’s senior vice-president, Steve O’Donnell, this week.

“(There’s) no set timetable as to when this (fencing upgrades) will be completed other than the fact that we know the (Talladega) race is coming up in May. Anything we can do, we’ll apply in May.”