Nick Percat poses with Tony D’Alberto in the Hiflex Holden

Percat has spent the past two years co-driving alongside Garth Tander at the Holden Racing Team, and moves into the Walkinshaw customer team in the same year he has stepped out of the Dunlop Series and into the Carrera Cup.

Percat finished third overall on his Carrera Cup debut at the weekend and says he’s expecting the TDR Commodore to be a contender in the V8 Supercar enduros.

“To walk into TDR, it feels like I’m walking into home. I feel very comfortable here,” said the 24-year-old Percat, who won Bathurst alongside Tander in 2011.

“It’s exactly like being at HRT. I know the engineers, I know the mechanics and I get along with Tony very well. We trained together a lot over the years and we both have the same goal.

“TDR is a single car team, so it’s a lot different to where I’ve been, but there are a lot of things that is going to make it a very easy transition into the team.

“As Tony proved in Adelaide, he is fast and consistent and doesn’t make mistakes. He has great qualifying pace too. The cars have shown good initial pace, so I’m thinking we should be a contender.” 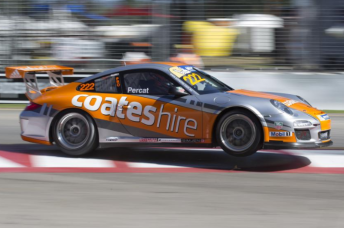 “He is a young guy, and with his two years of experience in the Bathurst 1000 will make him a great asset to our team,” he said.

“He’s been in the Walkinshaw Racing system for many years, which is a huge bonus for us.

“It’s great that he’s doing Carrera Cup this year. It’s going to keep him race fit and I’m very confident that we’ll be a strong combination come the endurance races.”

Having confirmed his squad’s switch back to Holden and the resigning of major sponsor Hiflex in recent months, team owner Al D’Alberto says the signing of Percat is another key milestone.

“This is the final piece of the puzzle in our 2013 race plans, and we are pleased to welcome Nick to the team,” he said.

“He is a focused driver and only has winning on his mind. He has a great history with the Walkinshaw team, and he is already slotting in easily with our team.

“Tony produced a great pair of results in Adelaide, and we’re very confident that Nick will compliment Tony and the whole TDR team at the endurance races.”