PIRTEK POLL: Will the Car of the Future deliver more exciting racing?

PIRTEK POLL: Will the Car of the Future deliver more exciting racing? 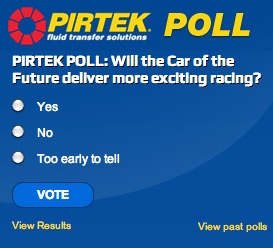 After seeing the Clipsal 500, will the racing be better with the new-generation cars?

We’re one event into the V8 Supercars Championship’s ‘Car of the Future’ era, but the jury is still out as to whether the new regulations will deliver more exciting racing for the fans.

The presence of two new manufacturers on the grid, Nissan and Mercedes-Benz, undoubtedly increased interest levels in the season opener Clipsal 500 Adelaide event, with an all-time record single day V8 Supercars crowd of 95,000 spectators turning out on Sunday.

Although the more lively handling characteristics of the new cars made for spectacular viewing – particularly in the lead-up sessions  as many struggled to settle the rear of their machines – the two 250km races provided largely processional racing up front.

Variations in fuel strategy were responsible for most of the intrigue – a variable that will be missing for the majority of rounds under this year’s revised event formats.

The reliability wildcard that also added greatly to the anticipation can also be expected to trail off as the teams increase their experience with the new packages.

Passing did not appear a great deal easier than in previous years, with drivers such as Shane van Gisbergen noting that increased temperatures  when running directly behind Jamie Whincup in the second stint of Sunday’s race ensured taking the spot on-track was too great a task, despite having superior speed to his Red Bull rival.

The improved brake package did score acclaim from the drivers, however, with the resulting increase in confidence undoubtedly contributing to some of the entertaining dive-bombs seen in the closing stages of Sunday’s race following the late Safety Car.

During the races however is where it hurt the spectacle the most as those who started with their car ‘out of the window’ were unable to fight once the limit of their still-adjustable anti-roll-bars had been reached. Whincup himself was a noticeable example on Saturday.

With the teams still in the relatively earlier stages of developing the new cars and a variety of different formats and circuit types lying ahead on the 2013 calendar, what do you think of the new cars?

Have your say on Speedcafe.com’s Pirtek Poll below.