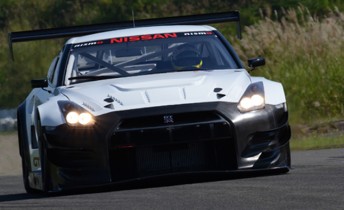 Nissan’s GT-R nameplate could return to the Mount Panorama podium next year as the manufacturer assesses an entry in the 2014 Liqui-Moly Bathurst 12 Hour.

The Japanese marque has invested heavily in Australian motorsport this season, using the V8 Supercars Championship as a key marketing tool for its yet-to-be-released Altima sedan model.

Aside from V8 Supercars, the company’s worldwide motorsport involvement is almost exclusively in endurance and GT racing.

Nissan’s portfolio of competition vehicles includes a JRM-developed FIA GT3 specification GT-R, which races in a variety of events and championships around the world.

The rear-wheel-drive, twin-turbo, V6 machine would be an outright contender in the Bathurst 12 Hour field, and according to Nissan’s global motorsport boss, Darren Cox, will likely be on the grid next year.

“Absolutely,” said Cox when asked if Nissan was interested in the Bathurst 12 Hours.

“We’re already talking about how we’re going to do it. If I know how we operate at Nissan and how I can make things happen we’ll have at least one Nissan GT-R in the Bathurst 12 Hour next year.”

The Bathurst 12 Hour’s growth since introducing GT cars into the previously all-production car field three years ago has not been lost on Nissan, with Cox quick to sing its praises.

“If you look at the growth of the Dubai 24 Hours in the last five years, for example, it’s gone from essentially a Dutch and English club event in the sun to having Audi and Mercedes chucking works drivers at it. You can see there is that opportunity to enable manufacturers and privateers to go to that type of event.

“Already you’ve seen massive expansion of the 12 Hour and I think in the next two or three years you’ll see full grids. It is a growth event and if we don’t have one GT-R there next year then I’ve not done my job properly.”

A production specification Nissan GT-R has competed in the Bathurst 12 Hour over the last three years in the hands of privateer outfit Donut King Racing, taking sixth outright and the Class C win in 2012.