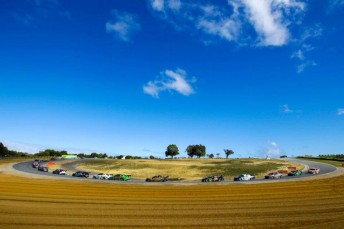 The V8 Supercars field at Barbagallo in 2012

West Australian dairy firm Brownes has signed on as the major sponsor for the V8 Supercars Championship’s visit to Barbagallo Raceway this May.

The event will be known as the Chill Perth 360, promoting the company’s flavoured milk range. Chill is an existing V8 Supercars series sponsor.

The Barbagallo meeting had been sponsored by Telstra, first through its Bigpond and more recently its Tradingpost brand, since 2007.

The Chill Perth 360 was officially launched in Perth today with Garth Tander, Alex Davison and Dean Fiore in attendance.

The main drawcard at the event itself however will most likely be two-time MotoGP World Champion Casey Stoner, who will line-up at the 2.41km venue for the second round of the Dunlop Series.

The May 3-5 event is the fourth event on the 2013 V8 Supercars Championship schedule and will feature a ’60/60 Super Sprint’ on the Saturday and two 120km encounters on the Sunday.

The 2013 event will be the second run with the circuit’s new infield pit complex.