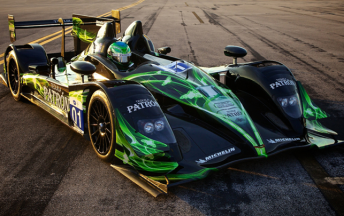 The HPD that Brabham will drive at Sebring and Road Atlanta

David Brabham will return to the American Le Mans Series for the Sebring 12 Hours later this month at the wheel of a familiar HPD prototype.

Brabham has signed on for Sebring and October’s Petit Le Mans with Scott Sharp’s Extreme Speed Motorsports outfit, which has joined the LMP2 ranks this year following a spell in the GT class.

The team has made the move ahead of the 2014 merger of the ALMS and Grand-Am that will see the LMP2 cars carry equal top billing with the Daytona Prototypes.

Brabham and Sharp won the 2009 ALMS title together in a Highcroft Racing HPD, and will be joined by Guy Cosmo in the team’s lead entry, with Johannes van Overbeek, Ed Brown and Anthony Lazzaro in the second car.

“It feels great to be heading back to the US to race with old friends, my former teammate Scott Sharp and Tequila Patrón, in the exciting new environment of Extreme Speed Motorsports”, said Brabham of his new deal.

“Scott and I enjoyed a lot of success racing together, we were the most successful Honda/HPD combination in the American Le Mans Series. I’m really looking forward to racing with him again.

“ESM has achieved a great deal in its short history, as last year’s GT success proved. Although the move up to P2 is a challenging one, I have every confidence in the team to succeed.”