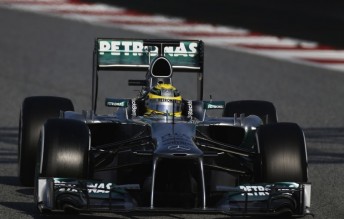 There were mixed messages coming out of the final pre-season F1 test from the Barcelona circuit with the pace of champion team Red Bull hard to define.

What was clear cut was that Mercedes and Ferrari have made decent progress in the off-season and finished with the best four overall times.

However apart from Mark Webber setting the quickest time on the opening day of the three-day test, Red Bull did not use the sessions to demonstrate outright lap speed.

Red Bull conspicuously completed far less mileage than its rivals and were ninth of the 11 teams that logged laps.

Over the duration of the test, Red Bull drivers Webber and Sebastian Vettel covered only 314 laps (1461km)