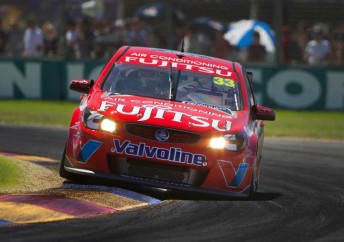 Scott McLaughlin showed tremendous maturity amid the roughhouse tactics to show he will be no pushover in his first full-time main game season.

The Garry Rogers Motorsport signing arrived at the season-opening Clipsal 500 with solid credentials, plunging into one of the most demanding V8 Supercars weekends.

But there was no honeymoon period for the teenager who won the Dunlop series last year along with the V8 SuperTourer Championship back in his native New Zealand.

McLaughlin found himself in a Holden Racing Team sandwich in the Saturday race when he finished sixth, splitting James Courtney and Garth Tander.

In the second race Tander gave McLaughlin a rub but came off second best while later on Courtney elbowed the 19-year-old wide.

“I raced with Courtney and Garth the whole way on Saturday and Sunday was pretty eventful especially with that last safety car,” McLaughlin said.

“I think I’m the new boy on the grid and they were just letting me know.”

McLaughlin wisely adopted the attitude that there is a time and a place to retaliate and refrained himself from any form of payback.

“I didn’t find any need to give it back to them. I will when I need to. Things didn’t really go our way with lapped cars and stuff. But I’m stoked.”

McLaughlin was impressed to at first make the top 10 shootout and then to finish the weekend sixth in the Championship points.

“The car was great straight out of the truck,” McLaughlin said of his Fujitsu-backed Commodore.

“To make the shootout was massive for me. I was only going for top 15. It’s great for me and the team. And the race went pretty smoothly. Top 10 in the Championship.

“It’s something I will cherish for a long time. It was a tough race and I was sore and exhausted and my feet were burning.

“It’s a good starting point and we’ll see where we end up in the next few rounds.”