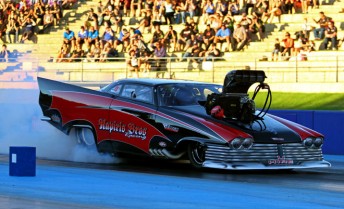 Peter Kapiris has maintained his sensational lead of the ANDRA Drag Racing Series Top Doorslammer Championship by defeating the in form Victor Bray at the Westernationals held at the Perth Motorplex.

Kapiris blasted down the quarter mile in 5.86 seconds to out charge Bray – who won the last round at the premier West Australian venue.

In the process, the Victorian eliminated pole sitter Maurice Fabietti and local hope, Daniel Gregorini. Bray knocked out Russ Pavey and John Zappia in the eight car field, despite the fact that a full 16 car field presented for qualifying.

The veteran pair lead the Championship points chase with Zappia – who is chasing his sixth straight Doorslammer Championship sitting in third.

Daley knocked out Kirsten Cannuli and Tyronne Tremayne on his way to the final – his second consecutive ANDRA Drag Racing Series win.

It enabled him to take the lead of the Pro Stock Championship.