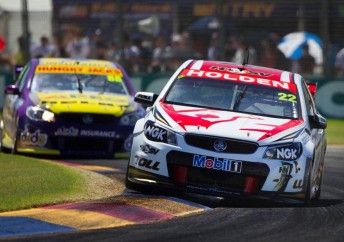 The ambitious plan hatched by Greg Murphy to run as a wildcard entry at the Pukekohe round of the V8 Supercars Championship from April 12-14 has been shelved.

Both Walkinshaw Racing and Murphy decided to make a call early and pull the plug on the mission which would have placed too much of a strain on the operation’s resources.

Murphy came up with the idea soon after being confirmed as an enduro driver for the Holden Racing Team earlier this year.

The scheduling of the Symmons Plains round, one week prior to Pukekohe, also played a role in the decision to abandon running Murphy who has a phenomenal winning record at the historic circuit south of Auckland.

Murphy stressed that the plan, to run at Puke which has been heavily redeveloped, was never at any stage a fait accompli.

“We spoke about the concept when I was finalising the enduro deal with HRT. It was my idea and was rather selfish I suppose if there was a chance of a wildcard,” Murphy told Speedcafe.com

“It would be cool to go back to Puke and it would just be a neat thing to do, nothing more than that.

“So we brought the concept forward and HRT looked at the viability and availability of cars.

“They were planning on having another car finished just before Symmons Plains.

“But the way things have panned out with time and resources we have decided not to go ahead.

“Everything that they (WR) need to do to focus on their three cars and the scheduling … the way it is it has just come down to one of those things that will place too much pressure on everything to make sure it’s done properly.

“We had to make a call on it soon on the financing to make sure we could find the money which was progressing but wasn’t in place.

“We were hopeful that wasn’t the stumbling block.

“With the workload required and the resources it was just going to put too much pressure on everyone.

“If there was a problem (with any of the cars) at Symmons Plains there was just no time.

“We didn’t want to get further down the track and find out we would have to pull the plug.”

“It’s disappointing but it’s not like we had it 100 per cent locked in place anyway.

“It just would be been really cool back there to have a shot around Puke on the new track.

“It’s not the end of the world. It would have been great for the Championship.

“But HRT and Walkinshaw Racing has got to focus on their priorities and they are the Supercheap car and the two HRT cars.