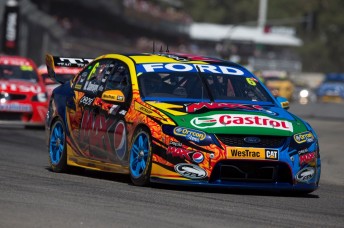 Factory Ford driver Will Davison was roundly beaten by Holden rival Craig Lowndes in Race 1 at the Clipsal 500 Adelaide but concedes he lost time due to some questionable driving standards.

Davison was exposed to lapped traffic when his Ford Performance Racing team strategy left him to stay out in the heat of battle longer in the first stint.

The talented driver, who threatens to emerge into championship contention again for the second year running after a competitive start to the season, did not mince words when dissecting his race.

“At the end of the second stint I came through some disgraceful driving,” Davison announced after finishing second behind Craig Lowndes.

“Guys were backing out of walls and nearly cleaning me up. Guys you are lapping were trying to outbrake you and outrace you.

“I lost probably a good three of four seconds before my second stop. That meant I came out behind a couple of the HRT cars and Webb (Jono) which I managed to pass in the first stint.

“So that was frustrating and I lost a heap of time getting back through those guys. We tried and seventh to second is not all bad.”

Davison was left running long before his initial pit stop and admits that the strategy could have unfolded various ways.

“Strategy could have gone many different ways. From where I was sitting, the car was hanging in there well in that first stint.

“We didn’t know what the drop off was going to be at that stage expecting a safety car.”

Davison also commented that he had several scares during the race which unusually did not produce any safety car periods throughout its 78-lap duration.

“I had about five absolute pukkas where I thought I was in the concrete so that’s not bad,” Davison smiled.

“When you are in a pack and you get aero understeer through there, you can’t see the apex. It’s good isn’t it?”

Jamie Whincup (Red Bull Racing Commodore), who was third after never seriously looking a likely winning chance, praised the fact that there were no safety car periods which would have closed the huge gap his team-mate Lowndes had at the start.

“There were opportunities for V8 Supercars to throw a safety car but thankfully they didn’t,” Whincup said.

“There didn’t need to be one so its good, keep it going.”