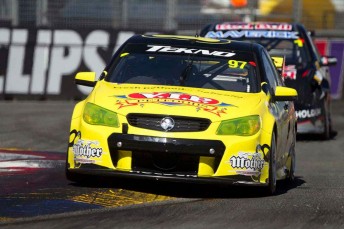 Shane van Gisbergen and Mark Winterbottom will share the front-row of the grid for the second consecutive day at the Clipsal 500 after another tight qualifying session.

The Kiwi set the fastest lap of the weekend so far to move to the top on his final lap, stopping the clocks at 1:20.71s just seconds before the chequered flag fell.

Jamie Whincup lost the first lap of his final set of tyres to the Turn 2 kerb sensor but was good enough for third regardless.

Will Davison completes the second row in fourth ahead of Fabian Coulthard, who led the way for much of the session but had his final run destroyed by contact with Garth Tander at the Turn 14 hairpin.

Alexandre Premat, Scott McLaughlin, Craig Lowndes, Russell Ingall and James Courtney round out the top 10, while Tander ended up 14th.

The Holden and Ford runners again dominated the top of the order, with Rick Kelly’s Nissan the fastest of the new marques in 16th.

It was another tough session for the underpowered Mercedes entries, which fill three of the bottom four places.

Maro Engel’s run was hampered by a continuation of the throttle problems that struck the #9 SP Tools E63 in Race 1.

Van Gisbergen’s pole position is the third of his career, leaving the 24-year-old hoping to improve on his Saturday effort, where he attempted to start the race in neutral.

“All I’ve got to do is remember to put it in gear at the start and we’ll be ok,” he smiled after the session.

“We had a good race car yesterday but had a gearbox problem. Hopefully we’ll be in the top five all day, I’ll be stoked with that.”

Coulthard, meanwhile, was philosophical after speaking to Tander post-session.

“It was a bit line-ball,” he said of the incident. “I thought my headlights were on and Garth said they weren’t.

“It’s disappointing to see a pole position slip away, but we’ve got a good race car and 250kms is a long race.”