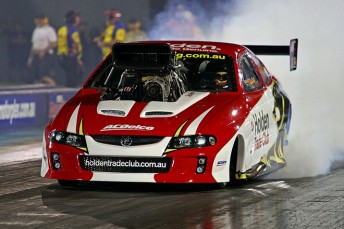 Maurice Fabietti has shot to the pole position in Top Doorslammer at the Westernationals aboard his Holden Trade Club Monaro charging down the Perth Motorplex quarter mile in 5.92 seconds.

Humid air restricted the performances of the Top Doorslammer field, but positions were still tight with points leader Peter Kapiris holding onto the final placing, qualifying eighth, with a 6.05 and will face Fabietti in the first round of eliminations.
Defending Champion, John Zappia was second fastest and third quickest was Victor Bray, who won the last round at the Motorplex.
Fabietti praised the efforts of new crew chief, Stuart Rowland, whose home track knowledge benefitted the Sydney-sider appreciably.
“It’s the first time we have top qualified for probably three years so it is great to have the Holden Trade Club Monaro out there doing well,” Fabietti said. “We didn’t think the time would hold and we got down there when a lot of people couldn’t.
“Stu (Rowland)’s home town knowledge is unbelievable and he has given me more confidence in the car again yet. There is more to go in my driving yet as well.”
Wayne Daley set the quickest time in Pro Stock, the other Championship category on the time-honoured Westernationals bill, edging out Jason Grima – who has a two car effort at this weekend’s event.
Eliminations begin this afternoon at the Perth Motorplex.