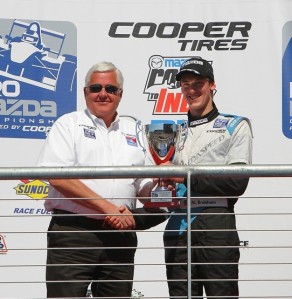 Matthew Brabham on the pdoum inTexas

Third-generation racer Matthew Brabham has scored a dominate win in race two of the Pro Mazda Championship at the Circuit of the Americas in Austin Texas.

Brabham made a great start in the second race and was in the lead by the exit of the first corner, then proceeded to drive away from the field. Even with a safety car period, Brabham was able to once again control proceedings.

“It feels awesome to get the win. I can’t describe the feeling,” said Brabham.

“Finishing third yesterday just made me a little bit hungrier for today. We managed to get the speed that we had all through testing back in this race and it definitely helped.

“The car was really, really good. I knew straight away, and that gave me a lot more confidence to get everything right

Brabham is second in the championship only four points behind Diego Ferreira going into the next round, which is at the IndyCar race in St Petersburg 23-24 March.