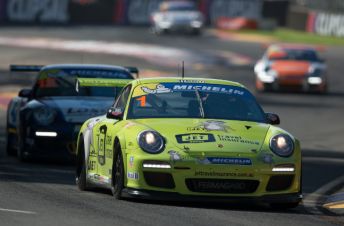 Craig Baird led every lap of the opening round of Porsche Carrera Cup in Adelaide, but his Race 3 win has been stripped after stewards found he jumped the start of the Sunday race.

Steven Richards therefore inherited the race win, with Baird slotting into third behind Nick Percat after five seconds were added to his race time.

The post-race change to the Race 3 results failed to alter the round podium, with Baird holding the top spot from Richards and Porsche rookie Percat.

Michael Patrizi stormed through from sixth to take fourth in the final ahead of Matt Kingsley, Karl Reindler and Shae Davies, who lost a number of spots at the start.

Warren Luff, who had finished fourth in the first two races, launched over the Senna Chicane kerbs and gradually lost places. He crossed the line in eighth.

Sydneysider Duvashen Padayachee crashed out in Lap 8, while Renee Gracie had a brush with the wall while trying to pass her McElrea Racing team-mate Tony Walls.

The next round of the Carrera Cup will be held as a support class to the Australian Grand Prix at Albert Park in two weeks time.