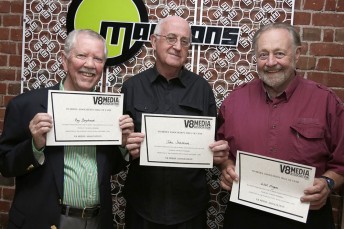 The V8 Media Association has presented four of its inaugural five Hall of Fame inductees with certificates, honouring their achievements in Australian motorsport.

Jon Evans could not make the evening event but was presented his certificate in the media centre today.

Berghouse, known for his love of aircraft and race cars, is one of Australia’s most celebrated photographers, marketers and publishers. Establishing Chevron Publishing, Berghouse has been involved with many racing mastheads, including Racing Car News, Motor Racing Australia and Muscle Car Australia. 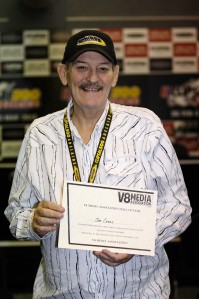 Hagon has one of the most recognised voices in Australian sport and has commentated on almost every form of motorsport – both on television and radio. He remains a regular on ABC Grandstand radio.

Stoneham started cartooning for the Rowley Park Speedway race program in Adelaide and has been drawing motorsport cartoons ever since.

Evans is a speedway man at heart, publishing his own magazine Oval Express, and is a regular on the V8 scene, producing his award winning race coverage for Auto Action.

The fifth Hall of Fame member Barry Oliver will be formally inducted at his home event at Symmons Plains in April.

The V8 Media Association also announced during the celebrations that head shots of the V8MA Hall of Famers will be displayed in Bathurst’s media centre after a deal was struck between the Association and the Bathurst City Council.