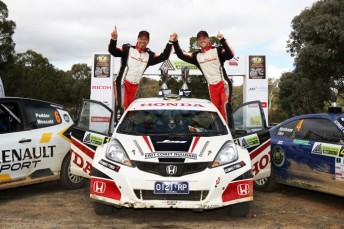 Renault’s Scott Pedder may have piped him to an opening Heat victory, but it was Honda’s Eli Evans who had the last laugh, claiming outright victory at the National Capital Rally.

Eli Evans was quick out the blocks, blasting to victory on the first stage with Jack Monkhouse second and Scott Pedder third in what would be a seesawing battle between the two all day.

The leading drivers had settled into a comfortable rhythm by the mid-point in the day, Evans leading by 10 seconds to Pedder, who had crept ahead of Monkhouse, while Tom Wilde, Mark Pedder and Steve Mackenzie rounded out the top six.

It was to be a complete change of fortune for all concerned though over the afternoons remaining three stages.

Scott Pedder was determined to shut down the advantage to Evans, but 100 metres into the stage, over the first major bump in the road, his boot lid burst open and he and co-driver Dale Moscatt were forced to drive the remainder of the 16.5km stage with a cabin swirling with dust.

“I think the scrutineers must have left the pins undone when they were checking the car before the start of the stage,” said Pedder who lost over 25 seconds in the process.

“It was unbelievable the amount of dust in the car!”

A late scare for the rally leader Evans when he clipped a rock on the racing line 2 kilometres before the end of the second last stage.

“It was the front right,” said co-driver Glen Weston. “Just gave it a little nudge and the tyre was straight away flat.”

Desperate to change the tyre at the end of the stage, and with little time until the start of the final stage, the Honda pairing worked up a sweat and made the start control with seconds to spare.

“My face was redder than my hair!” Evans joked at the finish.

They needn’t have worried, after Pedder’s boot drama the previous stage, he too would clip the exact same rock also suffering a puncture. The flat would mean Scott would settle for third, allowing Monkhouse to claim second and Evans the win with the gap almost a minute.

“The same rock as Eli,” an exasperated Pedder sighed. “And we lost second to Jack by only 2.2 seconds!”

Evans would claim outright honors for the weekend, Pedder second and Monkhouse climbing onto the podium in third.

“A typical Canberra weekend!” beamed Evans at the finish podium. “It’s always a tough rally on the machinery and we were really forced to pick the stages where we could push.”

“It all got a bit confusing there at the end with Scott’s boot and both of us getting flat tyres and I had no idea if I should push or not. In the end we proved all the improvements to the car we made over the summer work and I start the year with the points lead in the Championship and that’s very important.”

Despite his setbacks, and finishing third today, Scott Pedder arrived at the finish ecstatic with his weekend. “Second is a great result and our pace has been good all weekend. We have a lot of work to get the car ready for WA, and it’s a rally that has always been good to me, so I head to the next Round full of confidence.”