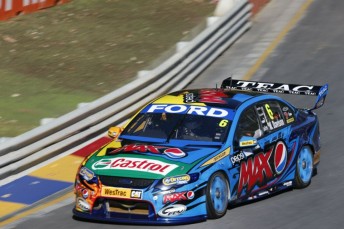 Ford Performance Racing was left bitterly disappointed by faults with control parts in the new Car of the Future rule package which cost the squad vital championship ground in Adelaide.

Apart from Will Davison’s second placing in the opening 250km leg of the flagship Clipsal 500 event, FPR had very little to show for the raw pace that saw Mark Winterbottom score two front-row starts and lead early in both races.

The team was the worst affected by the category-wide fragility of the new transaxle gearboxes, which most notably led to the retirement of Winterbottom from Saturday’s opening race.

David Reynolds also lost time with a gearbox problem in Race 1, while Davison soldiered through transmissions issues to take fifth and sixth respectively in the Sunday race.

The Race 2 results also came despite long pitstop delays for the two Pepsi Max Fords due to issues with more control componentry.

“We are not sure whether it’s the wheel nuts or the spindle,” team principal Tim Edwards told Speedcafe of the pitstop problems.

“We couldn’t get the wheels on. If the wheel doesn’t go onto the pegs then the nut won’t start.

“It’s a control part and we have no idea why. It didn’t happen to anyone else’s car. It’s new and all three cars the rear wheels did go on.

“The speed is there but reliability is a major issue,” he added.

“As everyone suspected Turn 8 is going to kill these (COTF) cars and it killed the back of that car,” explained Edwards, referring to The Bottle-O Ford, which only appeared to graze the concrete exit wall.

“It’s pretty disappointing really that was a pretty minor tap. With the old cars you would have driven away but the rear of the chassis is bent.”

Will Davison sits third in the standings after the Adelaide with Winterbottom 15th, Alex Davison 20th and Reynolds 23rd.