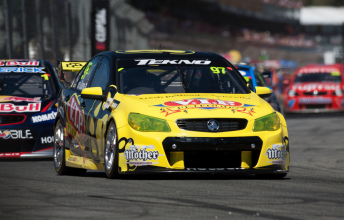 Shane van Gisbergen and Jamie Whincup were left to praise rule changes that enabled them to stage a full-throttle battle for the victory in the second leg of the Clipsal 500.

Amid widespread alterations to the season’s formats designed to take the emphasis away from economy, this year’s Adelaide event was run with the larger 110 litre tanks, while two compulsory pitstops ensured no teams attempted to sneak through with one.

The race was particularly satisfying for Van Gisbergen, whose third career victory came following months of controversy over his defection from Stone Brothers Racing (now Erebus Motorsport) to Tekno Autosports.

Again declining to comment on the team switch, which is understood to remain under the threat of legal action from SBR/Erebus, Van Gisbergen emitted a content persona post-race.

“It’s been pretty overwhelming but I’m pretty stoked to have put a good race together,” he said.

“It’s amazing just to get out there with a good car and just go racing. I really enjoyed that race – we were pushing 100 percent most of the way and the car was fantastic. I changed the roll-bar once, that was it.

“Today it happened easy,” he added when asked if the speed he and his Triple Eight-built Holden displayed throughout the weekend was a surprise.

“I was probably a bit behind the car. I’m learning a lot, but physically I kind of struggled through that race. I didn’t really train the last half of last year and over Christmas with no motivation.

“But coming back I’ve been hard into it the last month. I struggled but we made it to the end.

“That can only get better. I’ve got a trainer that’s kicking my arse, so we’ll keep working at that.”

Whincup led the middle stages of the race after leap-frogging Van Gisbergen with an early first stop, but could not build the five-second lead he required in the second stint in order to hold the position through the second cycle.

“The pace out there was pretty hot, we were going flat stick the whole way,” recounted Whincup, who showed greatly improved pace over his Race 1 effort following overnight set-up changes.

“It was good not to be on fuel conserve, mixture number four. It was just flat-out from go-to-whoa.

“We had an early first stop so I had to be a good five seconds up the road to stay in front on the last stint, which I wasn’t.

“We were the second quickest car today, so we’ll walk away and learn ahead of the Grand Prix.

“Without doubt it hurts,” he added of being beaten by a customer team – the first squad outside of Triple Eight’s main operation or Ford Performance Racing to win since November, 2011.

“We’re the factory team and Tekno are the smaller guys, and they trumped us today.

“But as I said the pace was on out there, they really stepped up. We didn’t do a poor job, full credit to them.”