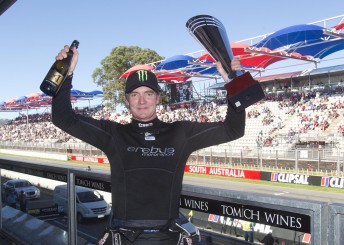 Craig Baird has continued his dominance of the Australian GT Championship, presented by Pirelli, taking victory in today’s half hour final race for Erebus Motorsport.

Baird got away at the beginning of the race, however in the timed pitstops, second placed Klark Quinn was able to leapfrog the Kiwi veteran. Less than half a lap later, Baird was back in front and then went about weaving his way through the lapped traffic to build the final winning margin.

Klien then put on a spectacular display of GT driving, smashing the lap record in the Erebus Motorsport SLS AMG GT3 Gullwing on the second to last lap with a 1:20.7152 lap.

The Austrian was at one point 11 seconds behind Quinn. He closed the gap to nothing and was setting for a pass on the V.I.P. Petfoods Porsche on the final lap, before running out of fuel one corner from home.

He coasted the Bathurst 12 Hour winning SLS across the line just half a second in front of Roger Lago’s Lamborghini.

Andrew Taplin rounded out the top five in his Ferrari.

Baird is chasing a rare feat this afternoon. If he wins the Porsche Carrera Cup race, he will have won five races from five starts in the two categories this weekend.